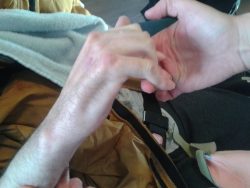 When Chris was 28 years old he suffered a severe brain injury as a result of being a pedestrian in a road traffic incident. His injuries meant he had to be ventilated on intensive care.
Once his condition had stabilised, he was transferred to a rehabilitation unit and then a nursing home. Since then Chris has relocated to his own home and is cared for there by his family and support team.
Chris has profound disabilities associated with his brain injury; these include him having very limited communication and being unable to move himself independently due to significant weakness and spasticity in his limbs.  Chris is totally dependent on two trained carers at all times.
In 2014, Osiris Director and Consultant Physiotherapist Peter Sanderson was asked by Chris’ mother Carol to provide an in-depth neurological assessment of Chris’ ongoing needs.
At the time, Chris was in a lot of discomfort, was very sensitive to being handled, he could not stand or move from one body position to another without assistance.  Sustaining one position for any length of time caused Chris a great deal of distress. The fingers of both of his hands were flexed tightly with his finger nails digging into his palms.
Maximising the knowledge of all those already involved in Chris’ care was of paramount importance to ensure everyone was working towards common goals.
The interventions recommended were a full examination of his limbs under anaesthetic, changes to and monitoring of anti-spasticity medication by our consultant in rehabilitation medicine, administration of botulinum toxin to the muscles of his upper and lower limbs, specialist hand therapy, serial splinting to the upper and lower limbs, individualised stretching programme, postural management programme and education of his carers and family on spasticity management.
Chris is currently reviewed every 6 to 8 weeks to closely monitor his response to his regular botulinum toxin injections into his upper and lower limbs. The Osiris team travel to the Isle of Man to deliver treatment close to Chris’ home to minimise the stress of travel to Chris and his family and carers.
Chris has had active treatment from the Osiris team for the past 14 months.  His response to the interventions has been promising in his lower limbs and he is now able to stand in a standing frame, practise perch standing with his physiotherapist and has started taking steps using a ceiling tracking hoist.
The changes to Chris’ medication have meant a reduction in his over sensitivity to touch. Chris’ positioning and posture have improved through a combination of the treatments he has received. His arms are more relaxed and his fingers are no longer tightly held in his palms. All these changes have contributed to his greater comfort.
Chris’ mum Carol is very pleased with progress, she said ” The Osiris team came here to meet with us initially and we were really excited – yes I know that sound crazy but we met someone with a positive ‘can do’ attitude just like ours – not promising miracles, looking at things realistically but seeing there could be improvements made.
We’ve seen huge improvements, Chris is in a  much better position than he was when first assessed, we’ve seen his body change and his posture and positioning have greatly improved.”
When asked about the Osiris team she adds “They are true experts in their field we trust them and can see what a difference their input has had in a positive way with Chris, and this has the knock on effect of improving the whole family’s quality of life. I regularly recommend the team to others in a similar situation to ourselves.” 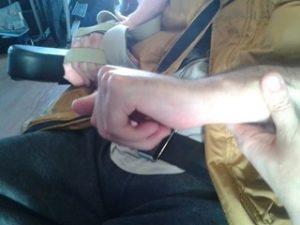 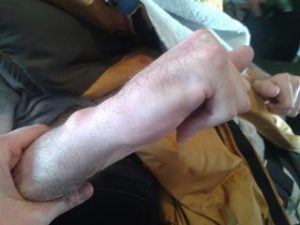 The below images show Chris wearing his splints: 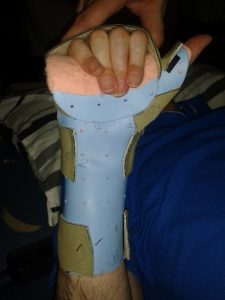 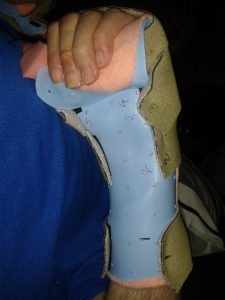 The below images show the current passive range of movement after splinting (being maintained with splinting): 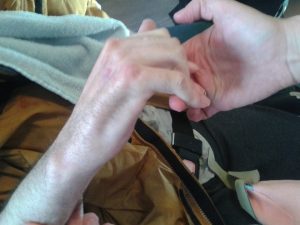 Back To Case Studies Read Next Article

We use cookies to ensure that we give you the best experience on our website. If you continue to use this site we will assume that you are happy with it. Ok